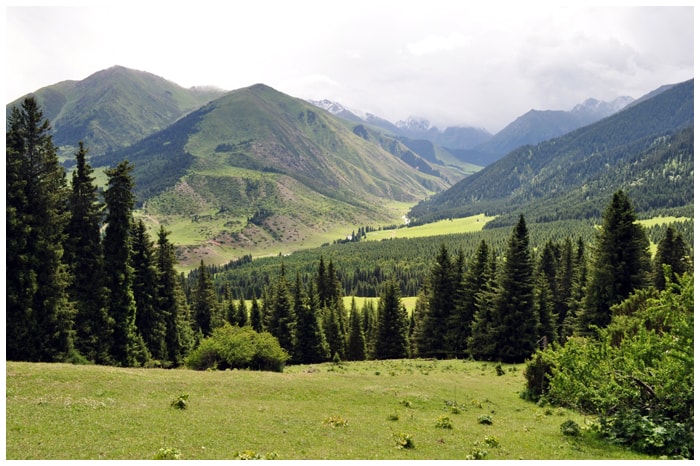 Ala Archa gorge
Ala Arch gorge is considered to be one of the most beautiful national parks in Kyrgyzstan and one of favorites both for tourists and locals. It takes place just 45 km from Bishkek city which mean that during one hour drive you will rise from 750 to 2100 meters above sea level. The name Ala-Archa means Bright Juniper. These trees are encountered everywhere in Kyrgyzstan. For Kyrgyz it is considered to be a sacred tree that they use almost in all their traditional rites. A new born child is put into a cradle that is made of juniper tree, when a person becomes sick he is smoked by juniper trees smoke to scare away the evil spirits, and when the just married couple is settled in a new yurt or a house, it is all smoked with juniper bush to clarify from evils by a very old and respected woman of the village. Read the tour...
Horse riding tour
Chon Kemin valley is one of the most beautiful places for organizing a horseback riding tours. It takes almost two hours to get there. Horses always played a significant role in the life of Kyrgyz nomad. A very famous Kyrgyz proverb says that a man without a horse like a bird without wings. It is almost impossible to imagine a nomad without a horse. Now you will also have a chance to ride it from Chon Kemin village right to the heart of Tien Shan Mountains. Read the tour...
Issyk Ata gorge
Issyk Ata is well-known for it thermal springs that flow all in the heart of its mountains. The trip there takes only two hours to get there. It is a gorge of spectacular nature and you can have a light track to a mountain waterfall where you can reach through a small pass. After this you can have a picnic nearby. Also as an option you can go to an open swimming pool with mineral hot springs. You can swim there and enjoy the view of spectacular mountains around! Read the tour...
Bishkek city tour
Bishkek has started to function as a city since 1878 so it has not so long but very interesting history.  Long time ago it looked like as a flat step without a single tree - and now it is one of the greenest cities in Central Asia! It's been ages since people have been struggling for this land, but Kyrgyz people have managed to save it for their next generations. During this trip you will be told the history of Bishkek city and you will be able to visit many beautiful places of interest. Read the tour...
Burana Tower
Burana Tower is a wonderful minaret dating back with the 11th century. Balasagun was the name of the flourishing city where this tower was built in and took place on of the main branches of the Great Silk Road.  Traders used to come here to bargain their goods and stay there for overnight. Nowadays the tower is only 24 meters high while the original size used to reach up 45 meters high. Earthquake in 15 century had of it fallen down. This tower used as a beacon light, a watching tower and calling place for prayers. The earthquake of 15th century made people flee this place who believed it has been cursed by God and nobody is supposed to stay there.What they thought was that God did not want them to live there. That is the reason why we still can find a lot things here because they have ran away without looking their way back. Many interesting artifacts have been found by our archeologists there and the local museum that used to be just the shepherd's house earlier can present some of those findings. The other part of artifacts had been taken by Russian in Soviet time. The houses in the city have been constructed with clay which melts with the course of time. Now it is possible to see only the tower and a hill nearby that supposingly been khan's palace. Read the tour...